Johnny Cash: Torturer – “Five Minutes to Live” and the Maniac in Black 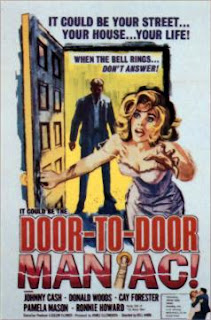 Back in the days before at-home internet access was the standard and IMDb topped every cinephile’s bookmarks list, I was an avid user of the Videohound Golden Movie Retriever, an annually published compendium of films available for home video viewing. As a voracious young movie buff and aspiring critic, I’d spend entire evenings poring over and memorizing the casts, directors and capsule descriptions of thousands of films. I studied the 1998 edition harder than I ever did any schoolbook. Eventually, I could have my pal Joel flip to any page and call out a random title, and 90% of the time I could tell him the plot and principal cast.

That encyclopedic knowledge came in handy when I browsed the racks at my local video store, but it also made me realize of the shop’s limitations. Videohound clued me in to dozens of intriguing-sounding titles that were simply unavailable in most of the outlets I frequented. Those obscure objects of desire ranged from trash like The Rats are Coming! The Werewolves are Here! to artsy fare like Alex in Wonderland to the mellifluously titled Spaghetti Western You’re Jinxed, Friend. You’ve Met Sacramento.

One forgotten film loomed above the rest on my must-see list, a low-budget crime flick from 1961 called Door-to-Door Maniac. That’s an indisputably great title, but that wasn’t the primary reason I wanted to track it down. That honor went to the actor playing the titular role: none other than the great Johnny Cash. The title, the star and Videohound’s damning bone-and-a-half rating made me believe that this was a movie I needed to see forthwith. Back in 1998, however, that was easier said than done.

Twelve years later, I finally fished a copy of Door-to-Door Maniac (presented under its less exciting, if more accurate, original title of Five Minutes to Live) out of the Cult Films section at my local Cheapo Discs. I don’t generally buy movies sight-unseen, but I reckoned I couldn’t really go wrong for eight bucks. I reckoned right.

On its surface, Five Minutes to Live is a grimy but not especially remarkable movie. It’s the story of the Wilsons, a bland small-town family with a few skeletons in the closet. Dad (Donald Woods) is prone to weekday hangovers and is having what looks to be an exceptionally chaste affair with a matronly neighbor. Mom (Cay Forrester, who also wrote the screenplay) buries her discontent under a blanket of passive-aggressive over-involvement with her women’s club. Junior (Ron Howard) channels his rage into a shrill series of precocious wisecracks and plots to one day torment humanity by making a string of grotesque, soulless, mega-budget movies.

These folks are so relentlessly unpleasant that it’s much easier to root for the purported villains, a smooth talker named Fred Dorella (Vic Tayback, looking especially large-faced) and a psychotic fugitive from New Jersey (!) called Johnny Cabot (Mr. Cash). Dorella has hatched a plan to knock over the local bank without pulling a stick-up: Cabot worms his way into the Wilson house and holds Mrs. Wilson hostage. Meanwhile, Dorella calmly orders her bank vice president husband to hand over $70,000 or his wife has five minutes to live. (Hey, that’s the name of the show!)

What follows is sort of an early ‘60s take on the techno thriller, with the perils and foibles of person-to-person calling at the center. As robbers, solicitors and nosy neighbors play a deadly game of phone tag, Cabot entertains himself by smashing Mrs. Wilson’s precious knick-knacks and torturing her emotionally, physically and possibly even sexually (the latter is only implied – this is a sleazy movie, sure, but it’s still 1961). Ultimately, it’s not a perfect B-movie – the ending is a cop-out that lets Dad off way too easy – but it’s sure as hell a memorable one.

It’s the Cabot character and Cash’s performance that establish Five Minutes to Live as something special. Forrester’s screenplay is surprisingly slimy, especially coming from a female writer of her time. It doesn’t try to pawn off a neutered, watered-down villain like many products of the era would. Within the first ten minutes, we see Cabot machine-gun a cop and shoot an unarmed woman in cold blood. This is a violent, remorseless and sadistic guy, and Johnny Cash is fully up to the part.

The cinematic vaults of the '50s and '60s are lousy with half-assed vanity projects for the era's pop stars, but this part bears little resemblance to Mel Torme’s frog-faced hood in Girls' Town or Roy Orbison's weirdness in The Fastest Guitar Alive. Sure, Cash is saddled with singing a tie-in title tune, but he makes it into a bad-ass meditation on evil and existence. In several chilling scenes, he taunts Mrs. Wilson with the song, looming close, strumming softly and reminding her she’s down to her last five minutes. It’s a brutal, muscular performance that sometimes goes over the top, but never egregiously so. There’s every reason to think it could have been a stepping stone to a long career of playing celluloid heavies for the Man in Black, had he chosen to take that route.

So how come nobody’s heard of this movie? It’s hard to say. My best guess is that Cash wasn’t particularly proud of Five Minutes to Live, not because of his performance, but because of who he was at the time. When Johnny Cash died in 2003, the few retrospectives that even mentioned his acting career focused on his '70s and '80s output, which ranged from half-respectable Westerns to made-for-TV garbage. In those later films (not to mention his prime-time variety show), a clean-and-sober Cash played variations on his somewhat tongue-in-cheek ‘70s “outlaw” persona. Five Minutes to Live, on the other hand, captured him at his pill-addled worst. The Johnny Cash of 1961 was a man of many demons, and they’re all right there on the screen. Later on, Rick Rubin helped him embrace his innate darkness while still walking the line, but it’s not too shocking that Cash would prefer that this documentation of his ugliest days stay buried.

Ordinarily, I’m all in favor of respecting a dead man’s wishes. In this case, though, the ongoing obscurity of Five Minutes to Live does a disservice to lovers of Johnny Cash and trash cinema. This movie needs to become a full-on cult classic post-haste. I encourage you to spread the word. After all, not everyone has time to sit around memorizing Videohound guides.

You can watch the entirety of Five Minutes to Live right here. You should do so. Right now. Come on. It isn’t very long.